It is a great pleasure to share news of continued growth and maturity by the board supporting Aloka Vihara! Our board meets four times a year, plus one day together for an annual board council, where we brainstorm topics such as long-term visioning. (In fact, we could benefit from professional support in our visioning process, so if you or someone you know has these skills and would be willing to assist, kindly contact me at <hitesi3@gmail.com>.)

We welcomed two new board members this year, Tara Mulay in July and Nils Heyman in September, both of whom bring personal and professional strengths that are so much appreciated and valued. 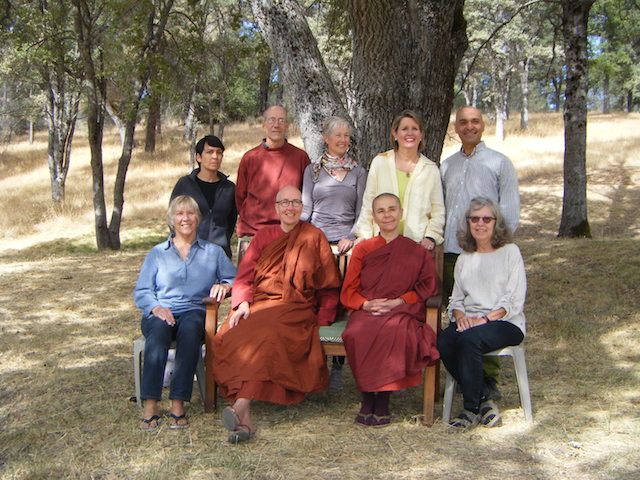 In acknowledgement of the tide of social change in the world, and to further our commitment to personal growth, benefiting others and ourselves, the white members of our board have embarked on a Dharma and racism study program, White Awareness Insight Curriculum for Uprooting Privilege (WAIC UP!). This program was developed by a group of Spirit Rock Community Dharma Leaders, based on a framework originally published by White Awake, and then offered to sanghas everywhere. May the seeds of understanding and change bear fruit!

We hope you’ll be able to join us for the Kathina on November 4th at the vihara. This year’s Kathina is offered by our longtime friends, Juliann Rhodes & Danny Bernstein. Our collective wish is to support the continued development of the monastery’s infrastructure, including energy efficiency improvements in preparation for making the transition to solar electric.

The board continues to focus on the ongoing needs of a vibrant monastery while enthusiastically embracing sustainable growth and the empowerment of the sisters and their community. We offer a deep bow to all of you who are participating and supporting this amazing endeavor!

Warm greetings! I hope this finds you well and with good support for the practice.

Spring came with abundant wildflowers this year at Aloka Vihara – and the inevitable poison oak too. The beauty and quiet of this land has an uplifting effect on the heart and mind and is a great support for the practice. We just completed a 10 day silent retreat at the vihara, closely followed by five days with Jetsunma Tenzin Palmo at Spirit Rock, teaching on the Therigatha – Verses of the Elder Bhikkhunis of the Buddha’s time. The teaching has been powerful and direct and it is a joy for us to be in the presence of an Elder Bhikkhuni for these days.

Through Spring and early Summer Ayya Santacitta and I have had full and fruitful teaching schedules, teaching retreats at IMS in Barre MA, the Lost Coast Retreat with Susie Harrington in Humboldt County, and at Spirit Rock, CA with Jetsunma Tenzin Palmo. In July I will be teaching with Jaya Rudgard (an old friend and Dhamma sister) at Vallecitos, NM, and after that will be more settled at the vihara until the end of the year. Last May Ayya Santacitta also visited the Canmore Theravada Buddhist Community near Banff National Park in Canada. Sanghamitta, the host and resident teacher, is a great benefactor and supporter of the bhikkhunis in North America.

As ever, things are shifting and changing. Dennis Crean, who has served on the Saranaloka Board for six years, put down that role at the April board meeting. He is staying connected to the vihara in other ways and we appreciate all the hard work and care he has put into Aloka Vihara Forest Monastery and the community over these years. We are delighted to welcome Tara Mulay onto the board now. Tara started visiting the vihara when we were first in San Francisco, some of you may know her.

In May, Ayya Ahimsa’s daughter, Alison, and 15 month old Ivan, came to visit for a few days. It was fun to meet them and to see Ayya Ahimsa’s little grandson enthusiastically point to his grandma, picking her out amidst the line of shaven headed nuns on pindapata.

On May 12 we joined Karuna Buddhist Vihara for the Upasampada (full ordination) of Ayya Cittananda, who has been a friend visitor to Aloka Vihara for some years now. On that same day, Ven Konin, took Samaneri Pabbajja and received the new name Dhammadīpā ‘Light of Dhamma’. We are so happy to be able to welcome Samāneri Dhammadīpā as part of the Aloka Vihara monastic community. You will find her reflections below.

Having the wisdom of mothers and grandmothers in the community brings a particular depth and strength that comes through that life experience.

At a recent meeting at Spirit Rock a statement was formed about the terrible violence and brutality that has been happening at the Southern boarder. It is a shock to take in the depth of harm that is being caused to families in this country, harm that will continue to take effect on these children and their families for a long time.

Dedicating blessings of the journey for the benefit of all sentient beings!
Ayya Ānandabodhī

On May 11th, I formally took the Eight Precepts of an Anagārika in the Theravada tradition. Though I have been practicing Eight Precepts for some time now, wearing the white robes felt very light. It also made for a clear and appropriate transition from my black attire as a Zen priest. This step marked my intention to wholeheartedly take up the Theravada way, and during the ceremony I took dependence on Ayye Santacittā and Ānandabodhī as my teachers in this tradition. I can honestly and joyfully say that it is their commitment to demonstrating the path of practice of the early Buddhist teachings that enabled me to aspire to this practice myself.

Then, on Saturday, May 12th at Buddhi Vihara in Santa Clara, California, I went forth in the Theravada tradition, after many years of practice in the Soto Zen tradition. Going forth is an outward, conventional expression of an enigmatic evolution that is happening within. Having known the Ayye for six years, and having visited Aloka Vihara a few times in the past, I came to live here in October of 2017. At that time, I was in search of a place where the practice would support turning inward, where practice would support a transformation of mind, heart, and body toward its natural clarity and peace. For me, the practice of monastic renunciation, the practice of Vinaya, is just such a support. It allows me to set down, again and again, those things that are unessential. It allows me to commit my entire life’s effort to the activity of being an instrument of Dhamma. And, it is like reaching back all the way to the beginning of the Zen lineage in which I was ordained 11 years ago, integrating the practice of the Original Teacher Gotama Buddha and the earliest disciples. I received the name “Dhammadīpā,” which means light or lamp or island of Dhamma.

The day of the Pabbajja was a shining example of blending like milk and water, as the more than eight sanghas that were involved joined together to make the day’s events both memorable and easeful. In particular, Ayya Sudinna, the Pavatini (Preceptor) who came all the way from Carolina Buddhist Vihara in Greenville, South Carolina was so joyful. It was a day full of mudita (empathetic joy), not just for me, but also for Ayya Cittananda who received her Bhikkhuni (higher) Ordination. It seemed to me that everyone shared such heartfelt caring for each other. The beautiful sunny weather was reflected in our hearts, and the great generosity of the dana revealed how deeply sangha members are moved by the Triple Gem of Buddha, Dhamma and Sangha. My heart is full of gratitude and joy for everyone who is playing some part in making it possible for nuns to go forth into this life.

We are delighted to be going into our three month Winter Retreat today, beginning with a period of group practice together, followed by individual solo retreats in the yurts and more open practice for those not yet in solitude. Noble Silence will support our practice during these three months, but there will be also regular occasions to discuss Dhamma together.

We welcome Julian back to support the Winter Retreat again this year and Gwen, who previously lived and worked at BCBS, will also be with us through the whole retreat. Carol, who has been with us for several months already, and Heather will be staying through the end of January. Visitors are welcome to join us for evening pujas on Lunar Observance days, and to offer meal dana throughout the retreat, please click here for more info.

Our New Year’s Retreat was held this year at the Applegate Jesuit Retreat Center of the Sierra, near Auburn. This new-to-us venue served our purposes well and we are planning to use it for the next New Year’s Retreat. The grounds are very beautiful and uplifting and the hall is comfortable and well suited to our needs. A difference is that rooms have to be shared, this adds a little additional edge of renunciation for the yogis, but people took it in their stride.

If you would like to listen to talks from the retreat, here are links for Ayya Anandabodhi & Ayya Santacitta.

Many of you ask about Ayya Jayati, she is currently in Thailand, where she will spend four months practicing in monasteries and studying with different teachers. She is well and is taking this opportunity to deepen her practice before returning to the UK at the end of May.

On a different note, we are glad that the Saranaloka Foundation has been able to change to a bank that is more in alignment with our ethical values. The New Resource Bank is a B Corporation, specializing in renewable & alternative energy, green building & green products. With our resolve to be part of moving towards the end of the fossil fuel era and saner ways of living, this is a very uplifting and heartening development. Thank you to our Finance Subcommittee, chaired by Satima, for doing the research and transition work!

We share blessings of our Winter Retreat with you all and wish you very well!