The evacuation order was lifted to warning status and we were able to go and see the results of the Caldor fire that passed over much of the Aloka Vihara property. The firefighters worked hard to protect the house. As you can see the house and dorm are untouched by the fire. 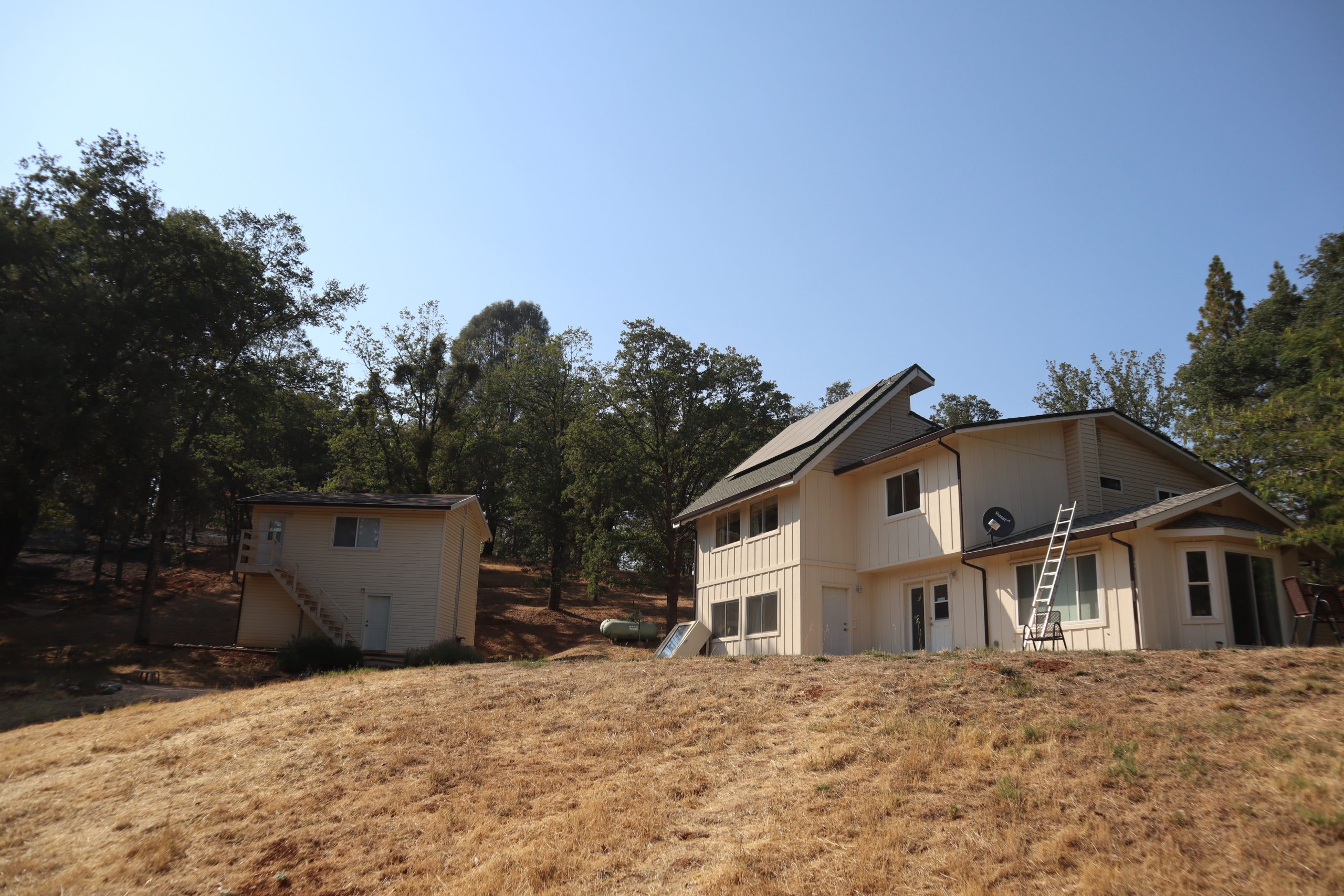 Below are more pictures and a narrative of our visit Saturday, Sept. 4th. 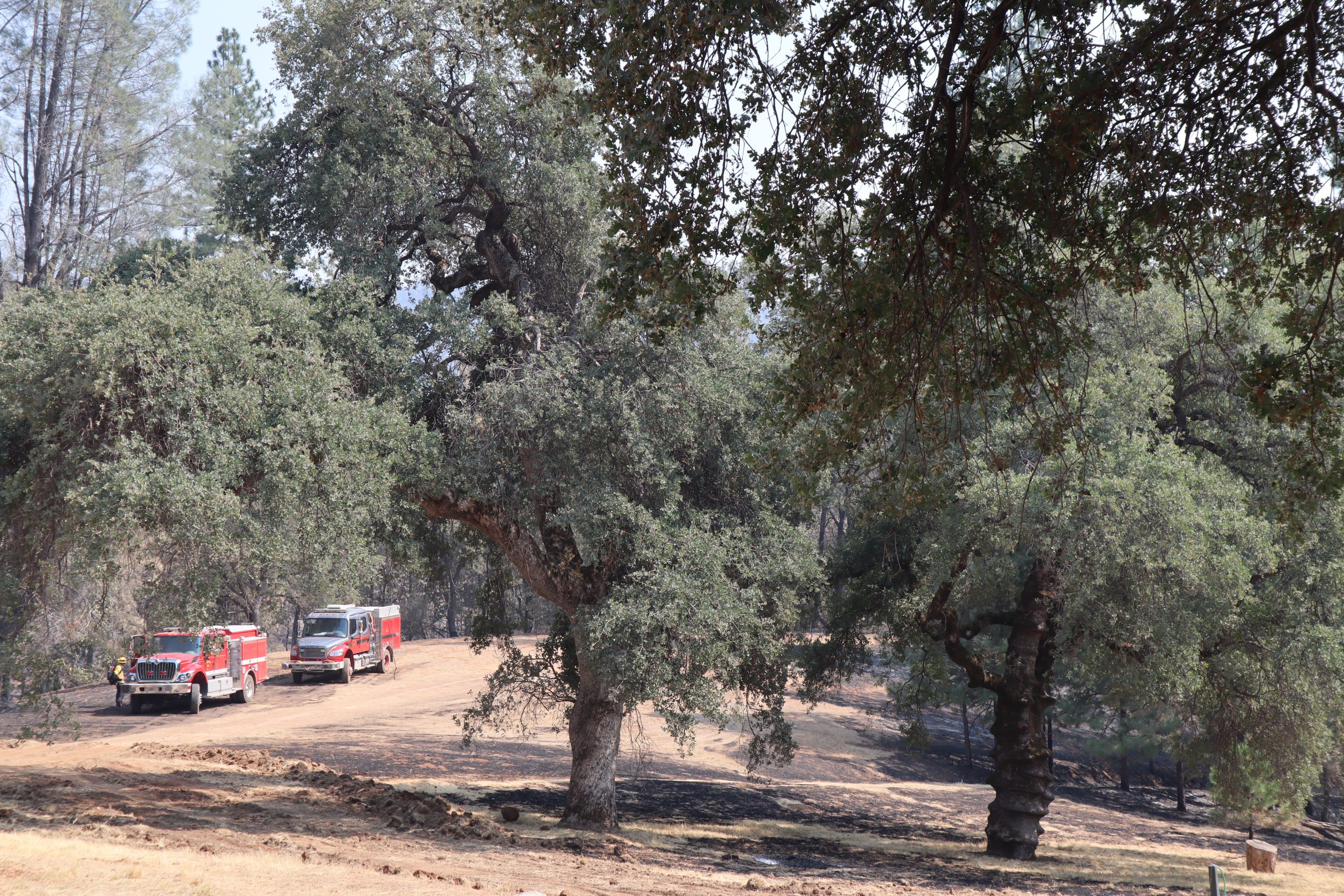 When we arrived there were two fire trucks in the meadow. We spoke with the firefighter who was staying with the trucks while a group of four were out in the forest making sure any places still smoldering were cooled. We thanked him and, through him, all the fire personnel for their amazing work.  Much of the immediate view was still green trees while the ground was obviously worked over with bulldozers and intentional fire to create fire breaks. 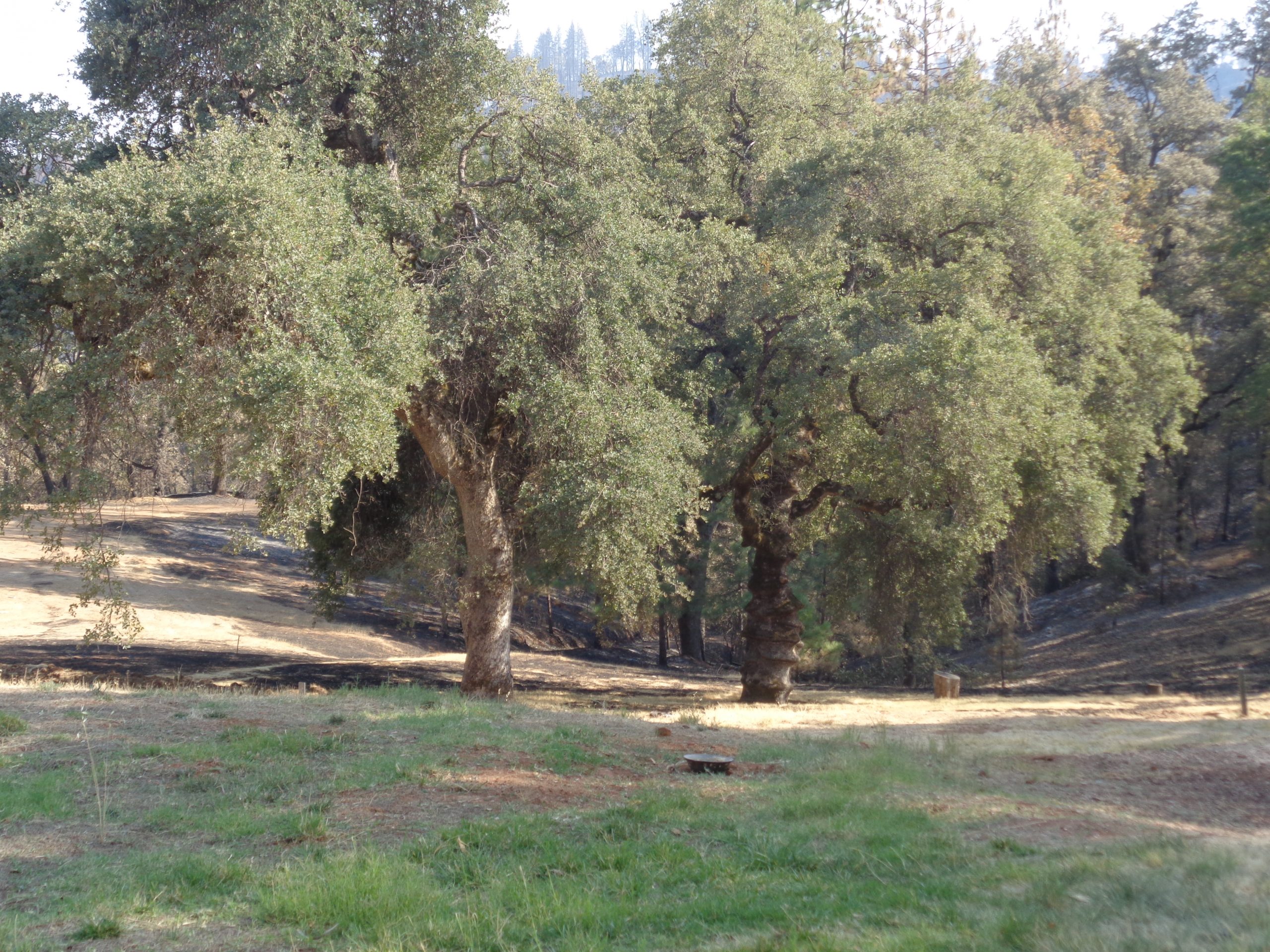 We could see where work was done to burn part of the field and around the oaks to save the house and the oaks from meeting the full force of the wildfire. 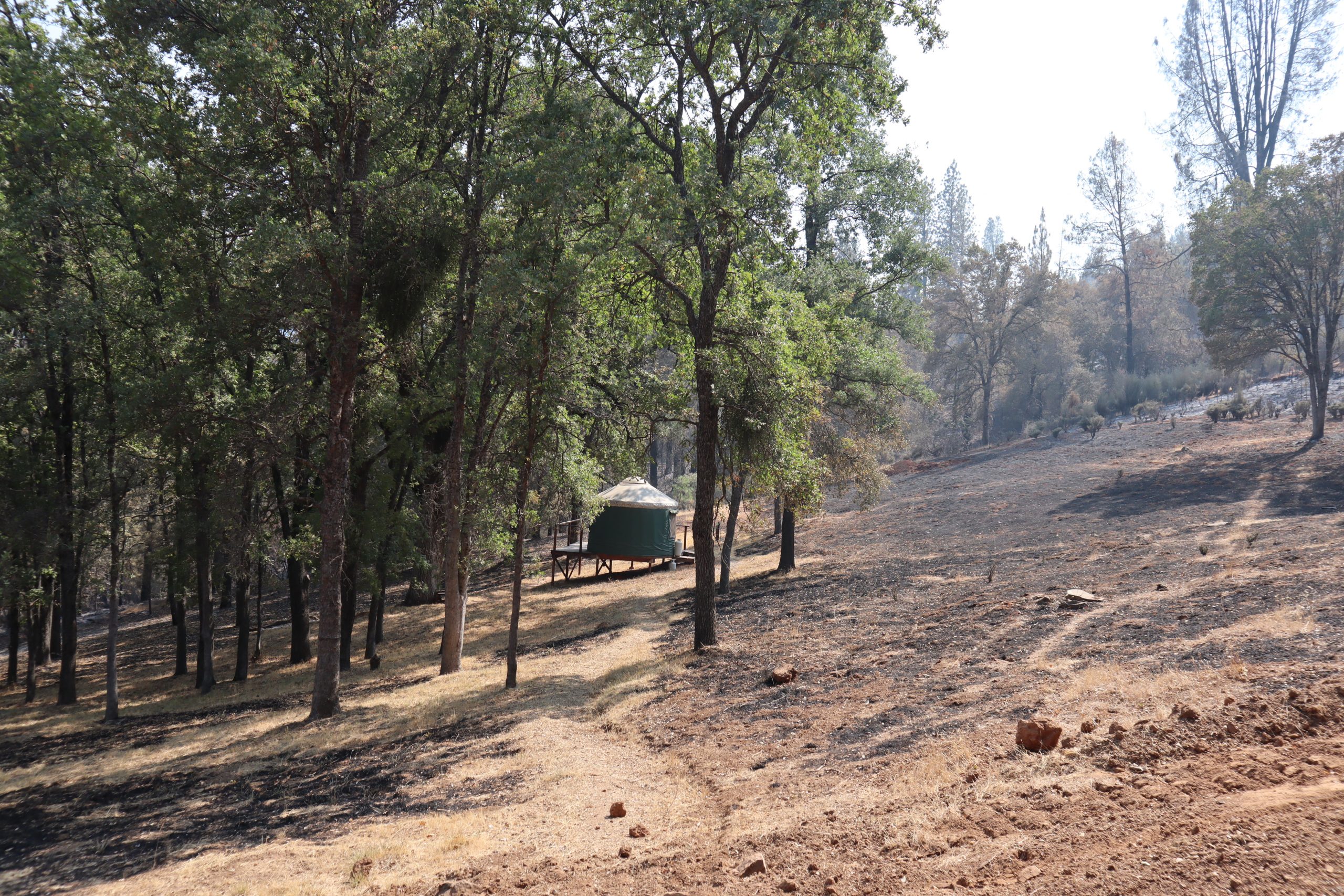 The green yurt rose completely safe out of swaths of burnt and unburnt ground which were part of their back burn operation. 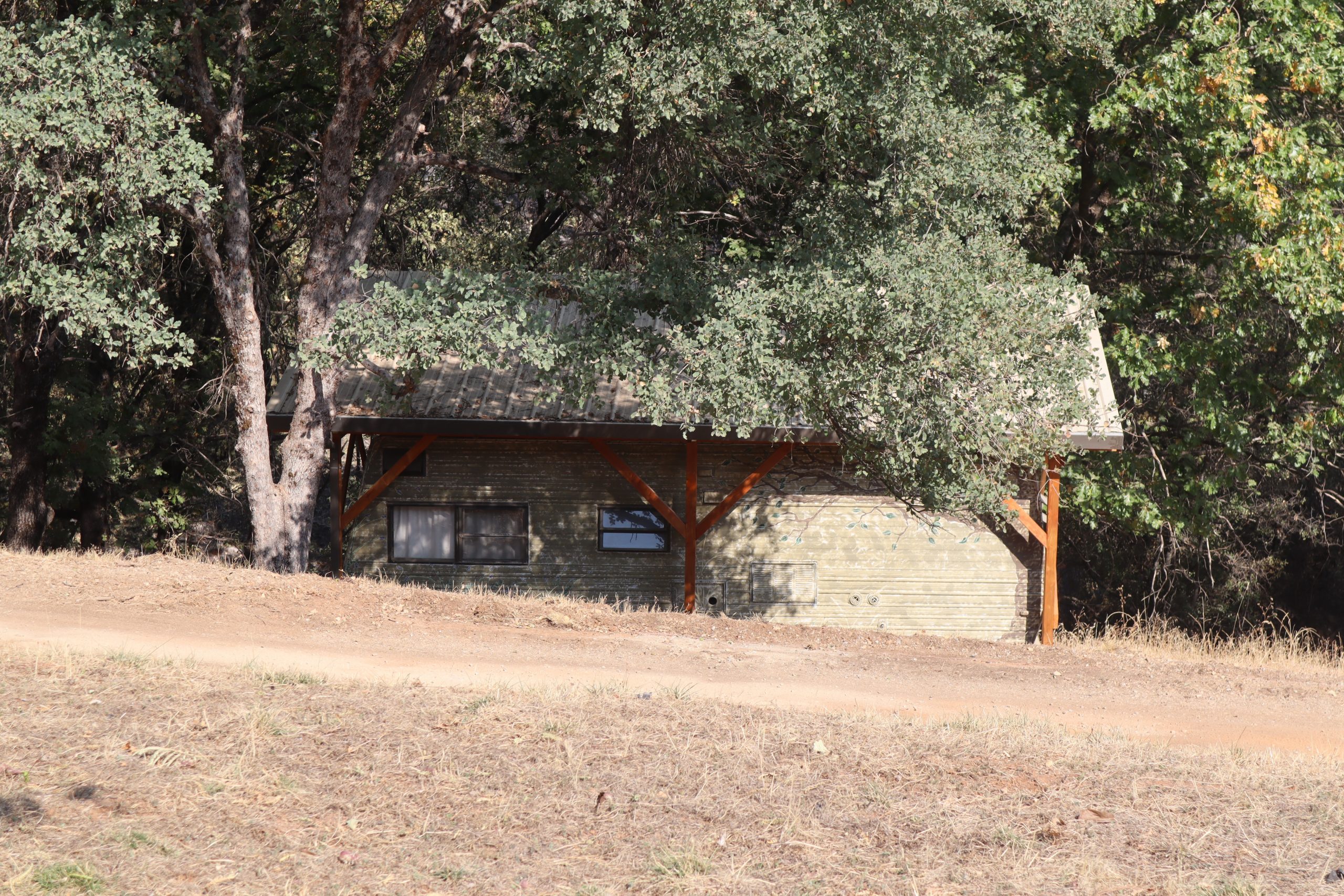 We could see the trailer had not been touched by fire at all.

Our next stop was the house which smelled a bit of smoke but seemed completely habitable. The power was on, the internet and phone were functional, and the water was running, although smelling very bad.

With boots on, we then walked the loop, starting with the upper road which brought us to the trail to the kuti. 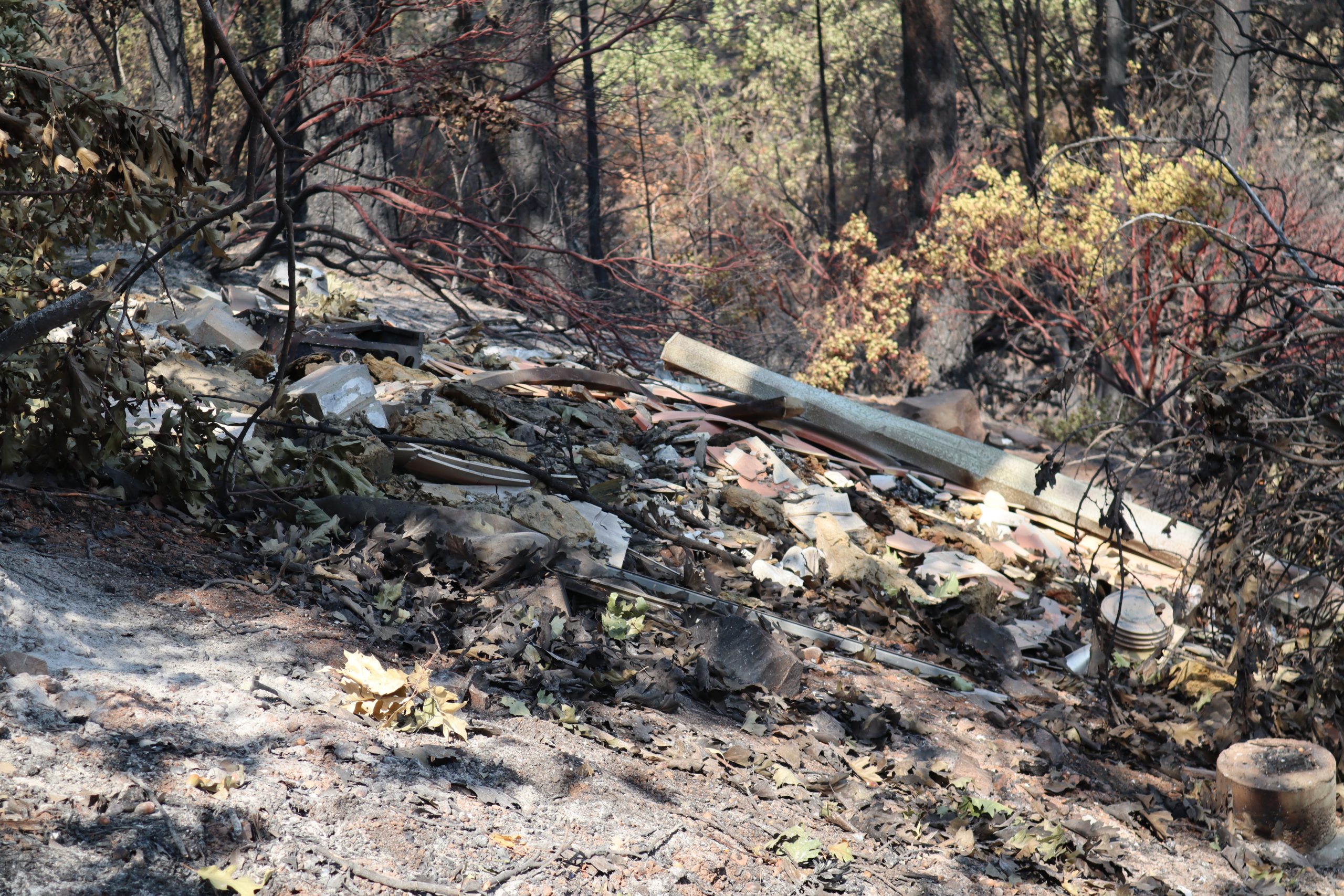 The kuti was gone. It had transformed from a carefully and lovingly constructed meditation cabin into a pile of burnt rubble. The sense of impermanence was palpable. 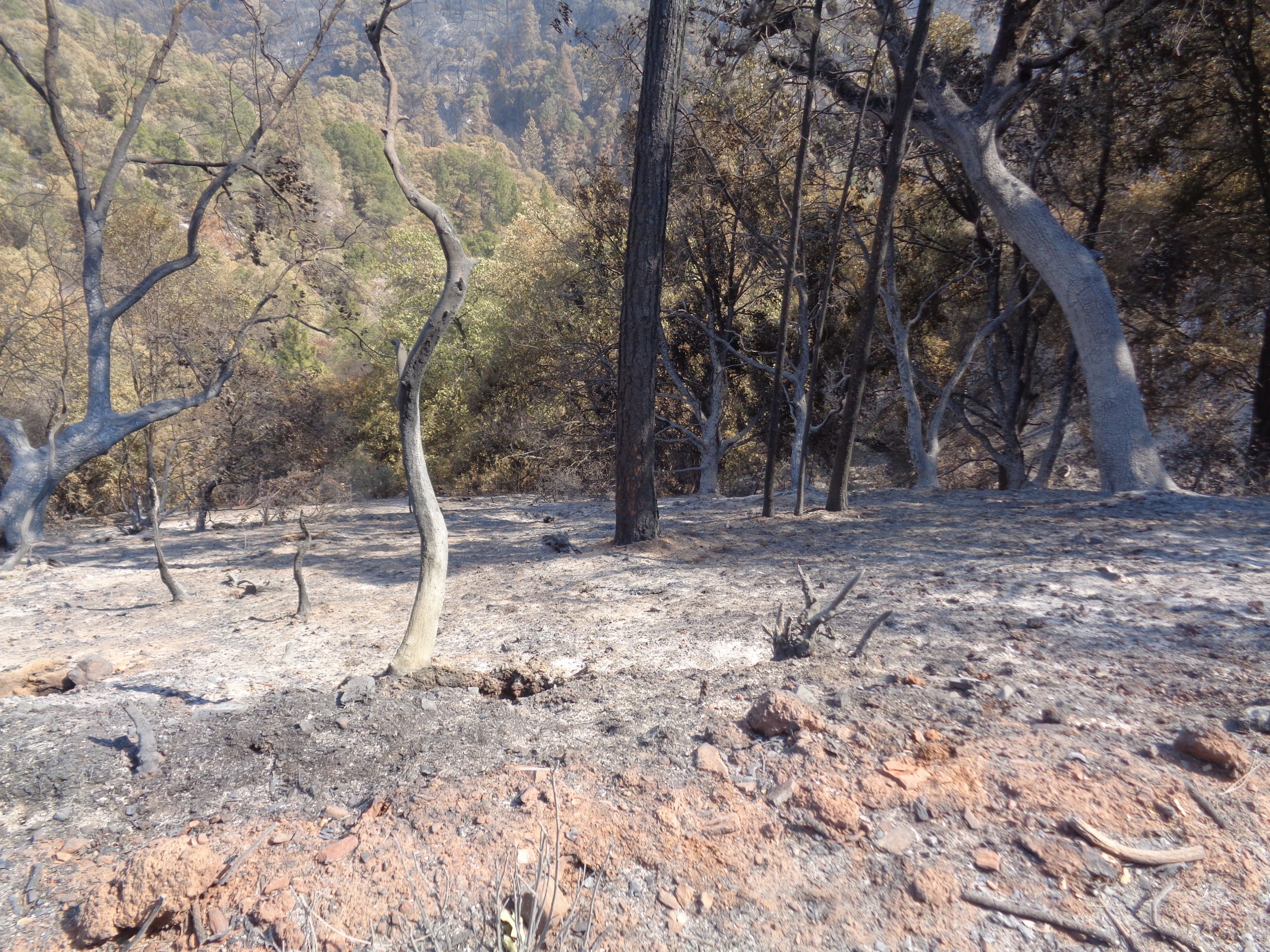 Walking the rest of the loop there were areas where the roots of trees under the road were burnt and the road was cracked and partly caving. There were also downed trees and a stump hole still smoldering. 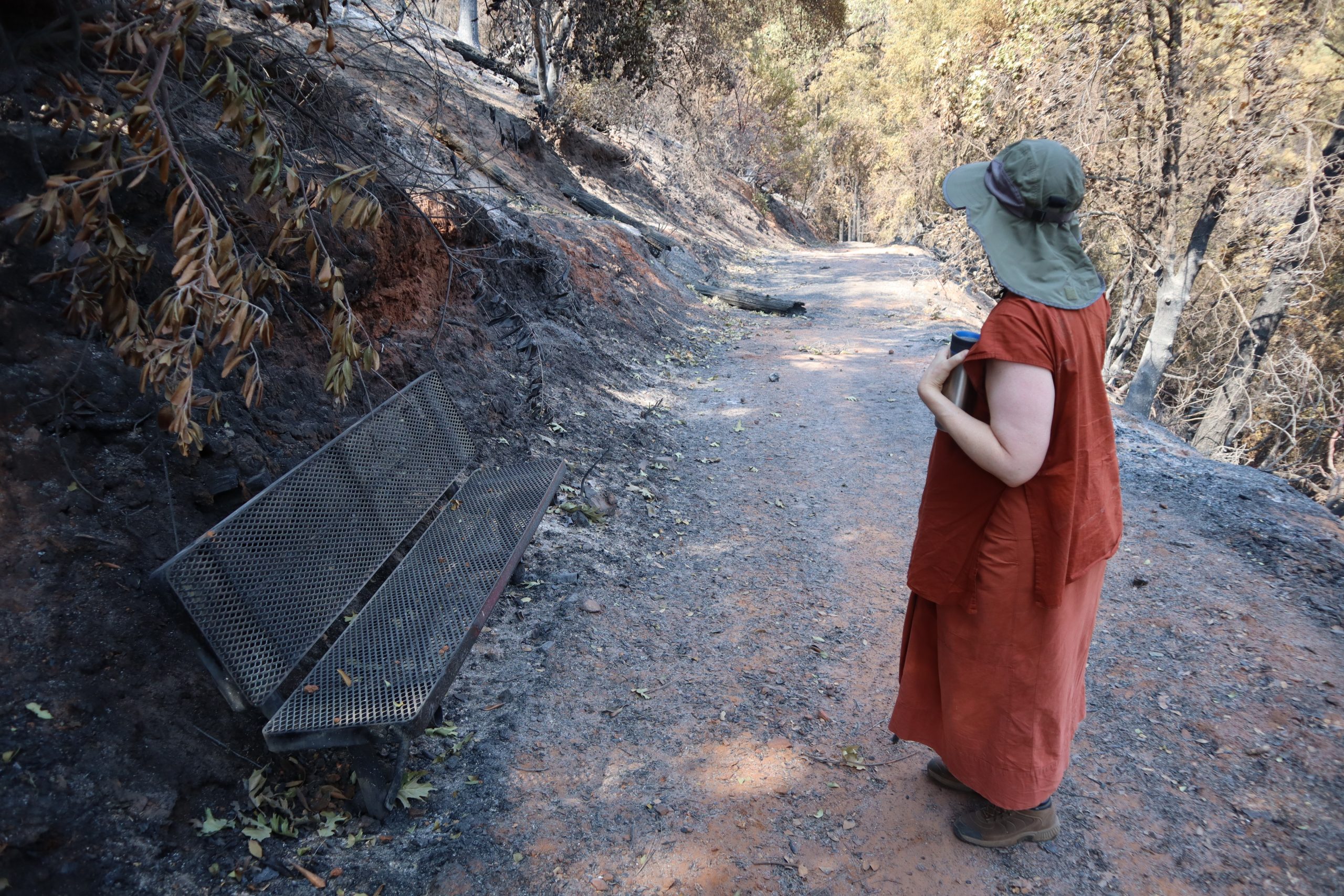 Coming back up the lower part of the loop, we passed the red bench with most of its paint blistered off. 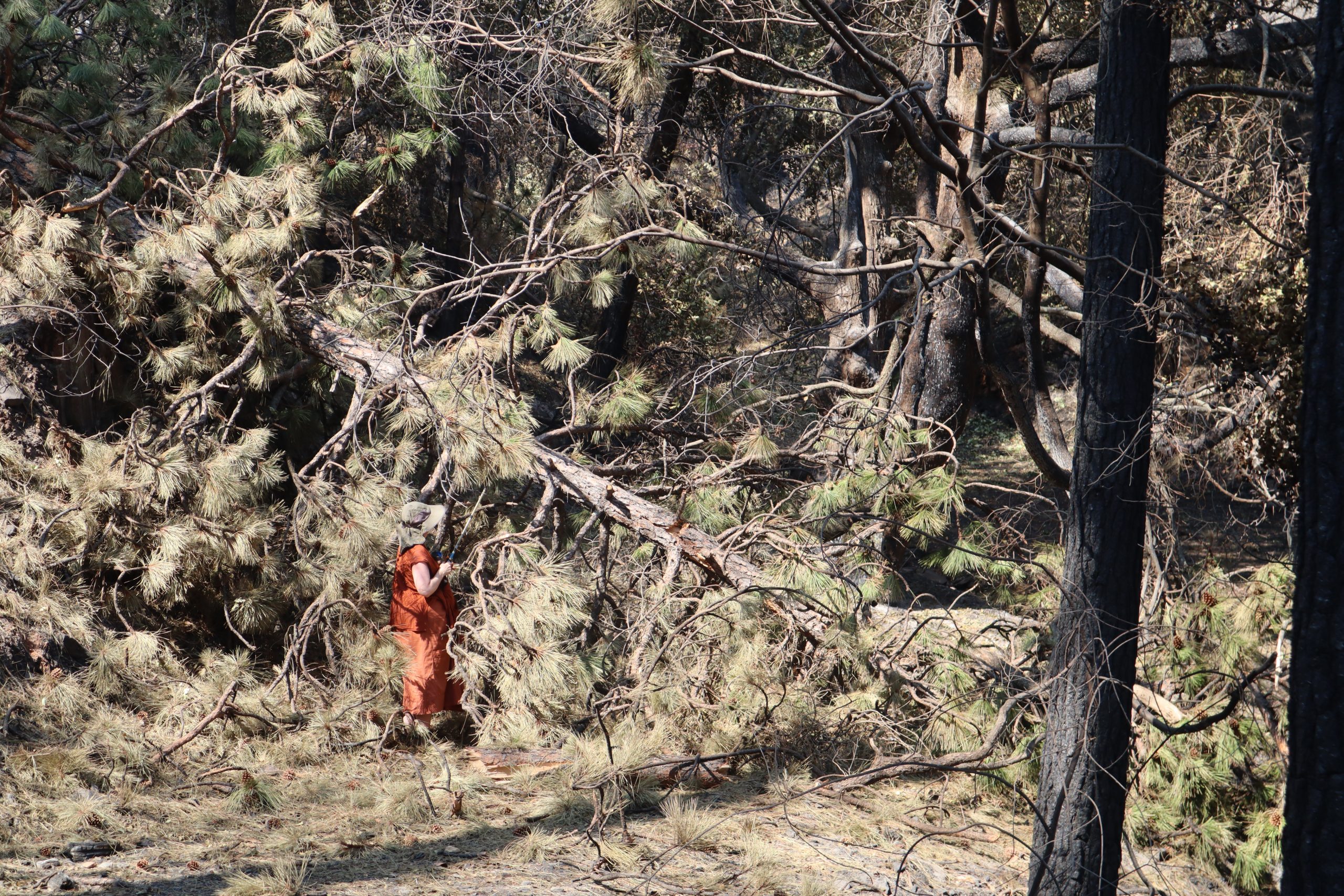 We passed more downed trees, the charred tent platform, and a very ashy looking trailhead to the creek. 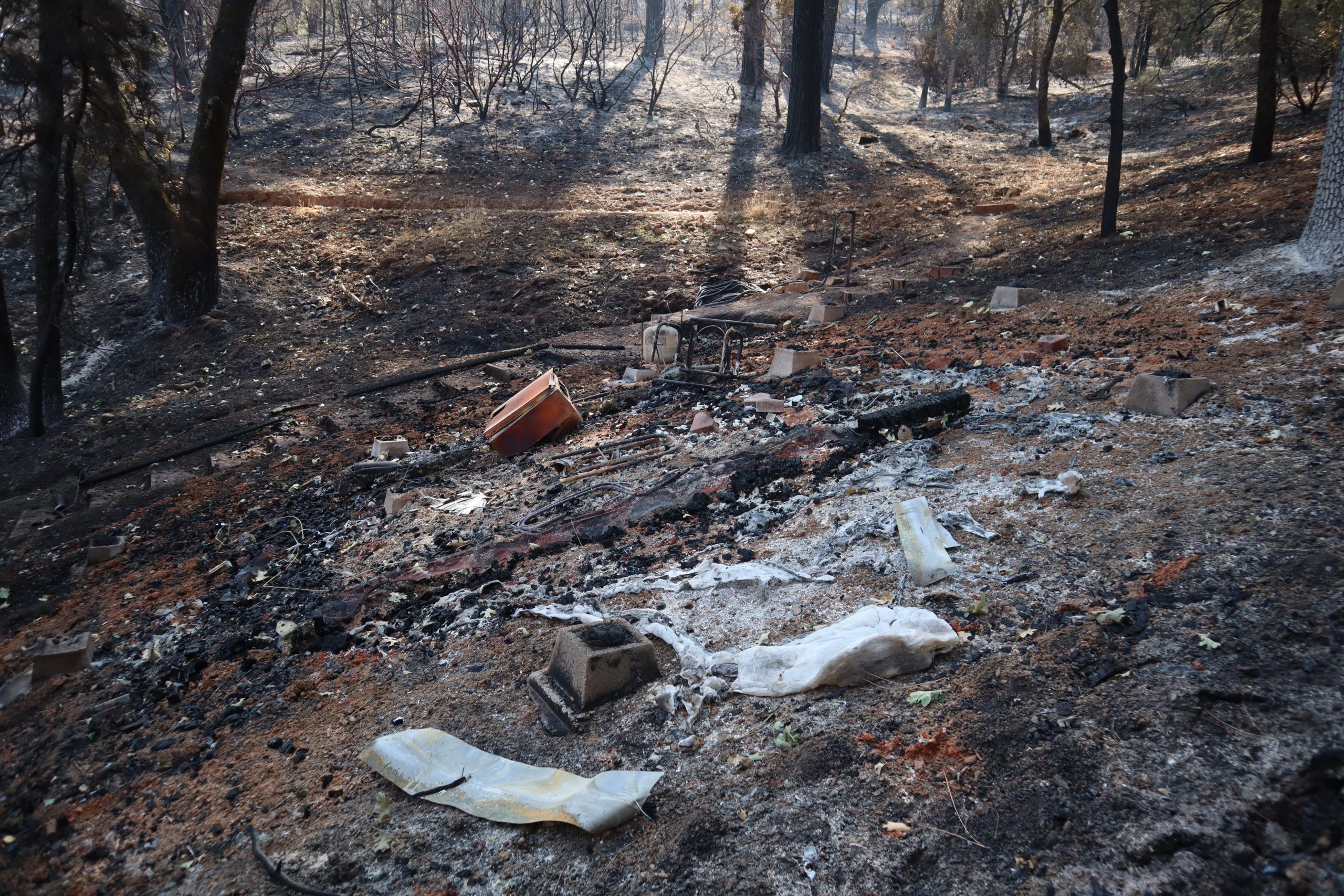 We then came to the burnt remains of the terracotta yurt. 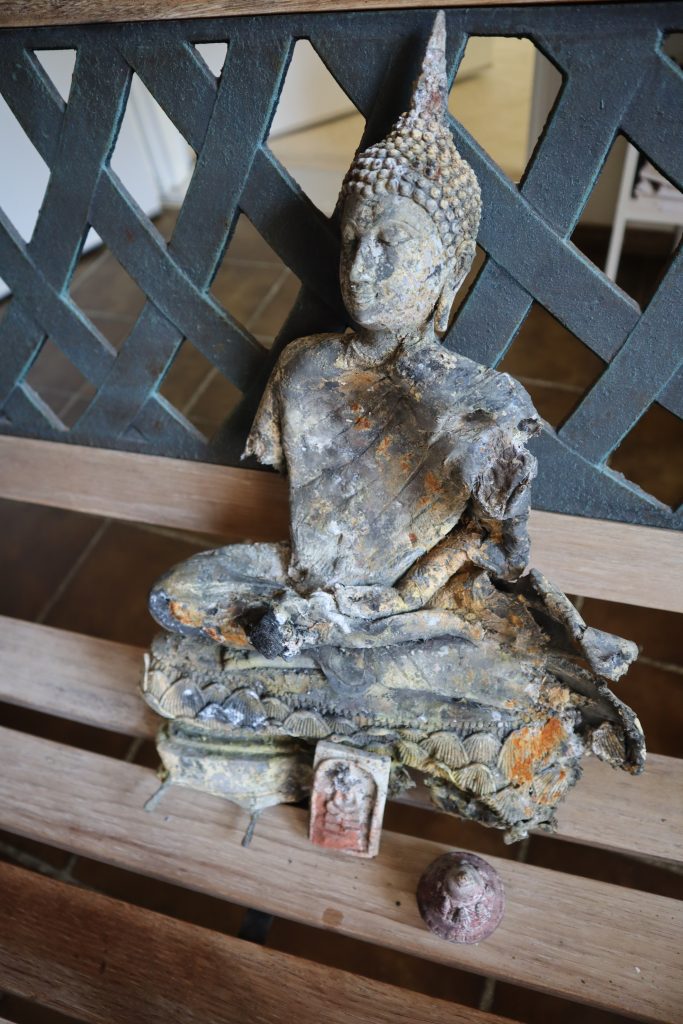 Ayya Niyyanika found the melted Buddha rupa and a couple of other items from the terracotta yurt shrine and brought them up to the house. 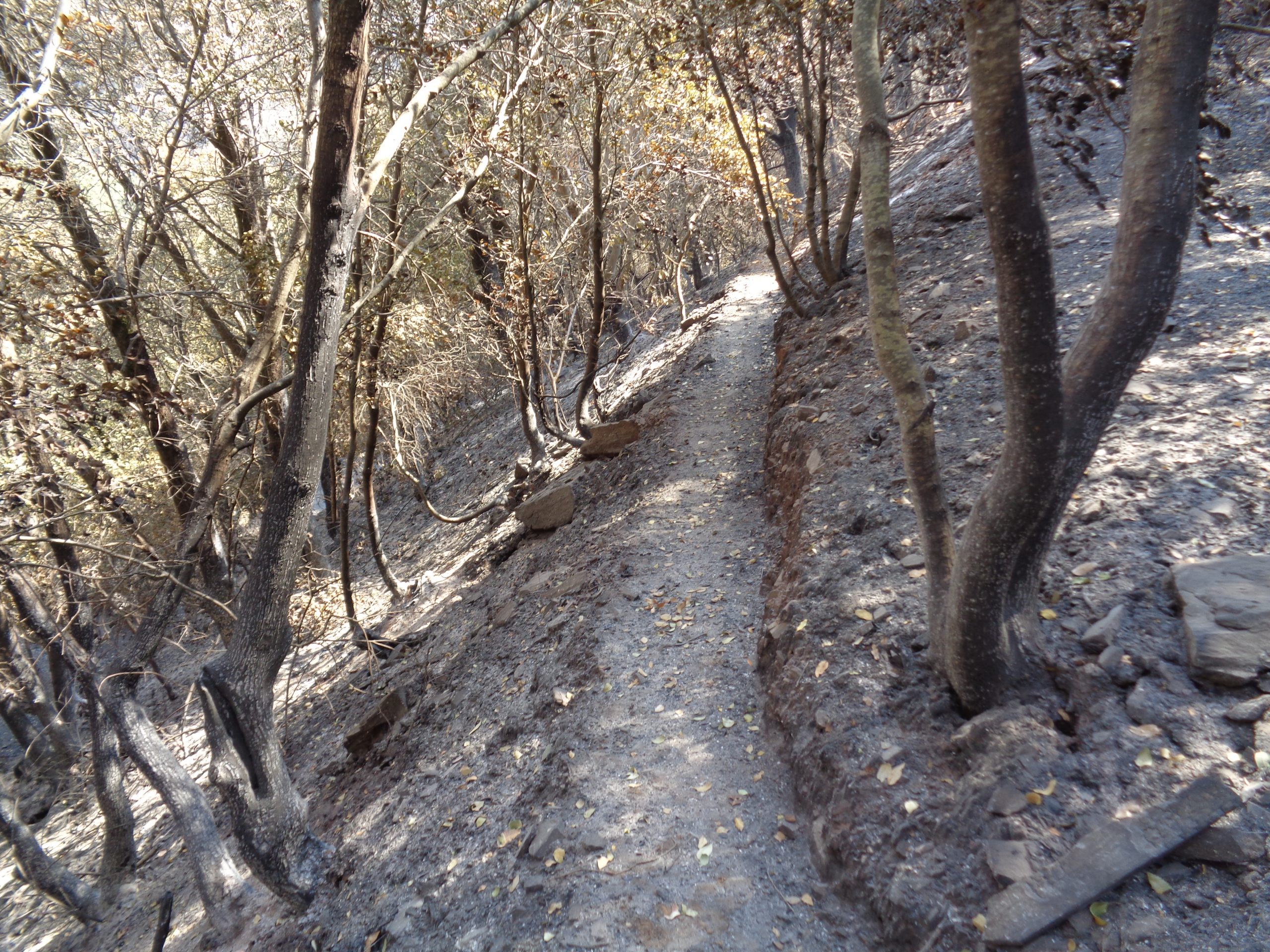 Ayya Ahimsa went just a ways down the trail to the creek and there were four spots still smoldering. 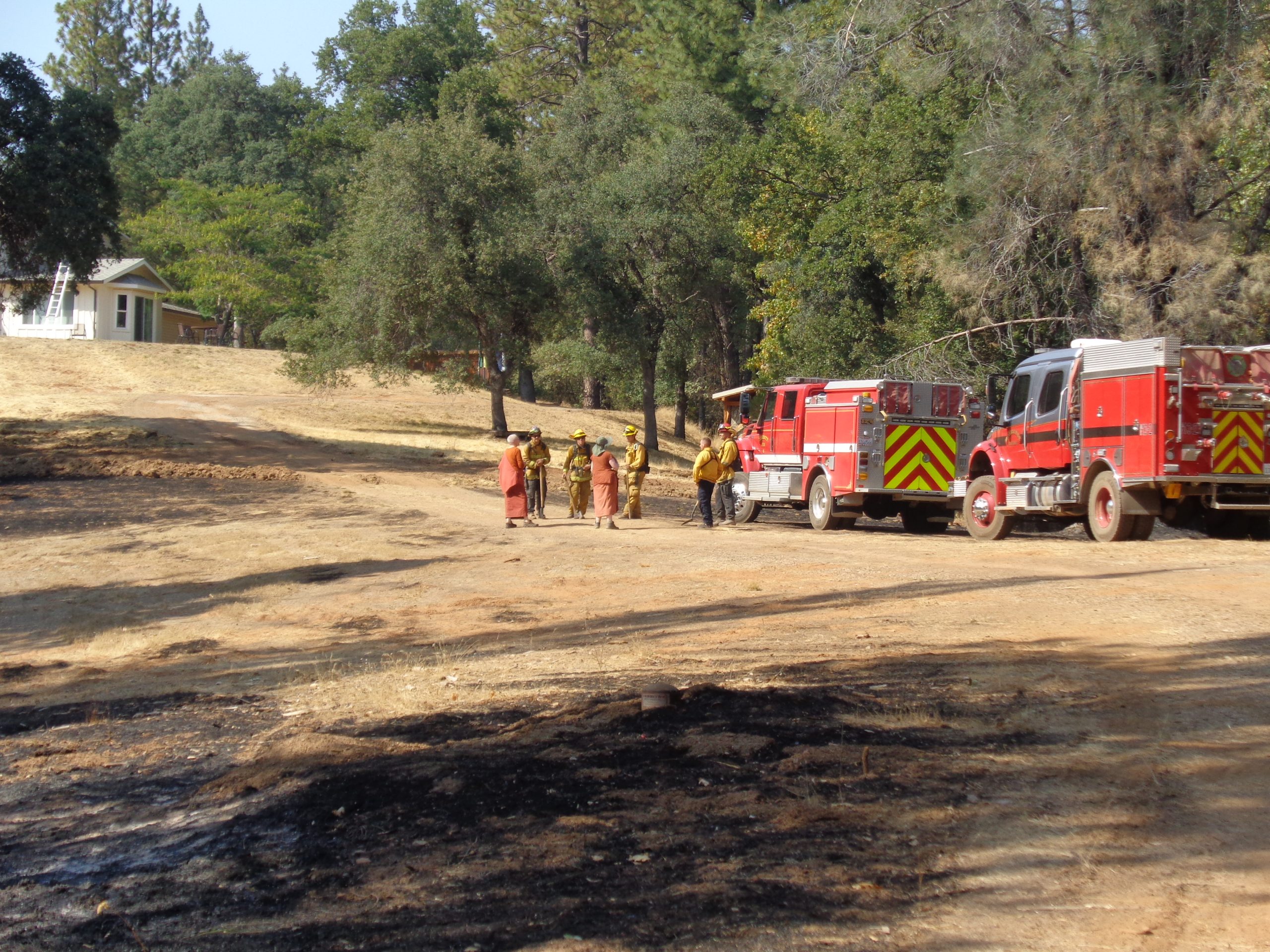 We made it back to the fire trucks in the meadow to let them know about the areas with smoke. They told us that earlier in the day they saw one of the doe and fawn up at the house and two bucks up the road. Ayya Anandabodhi and Ayya Niyyanika thanked the fire crew again.

On our way to the monastery we had purchased a large water trough, a bird bath, and a salt lick.  All were put out for the animals we share the land with for their continued well being. 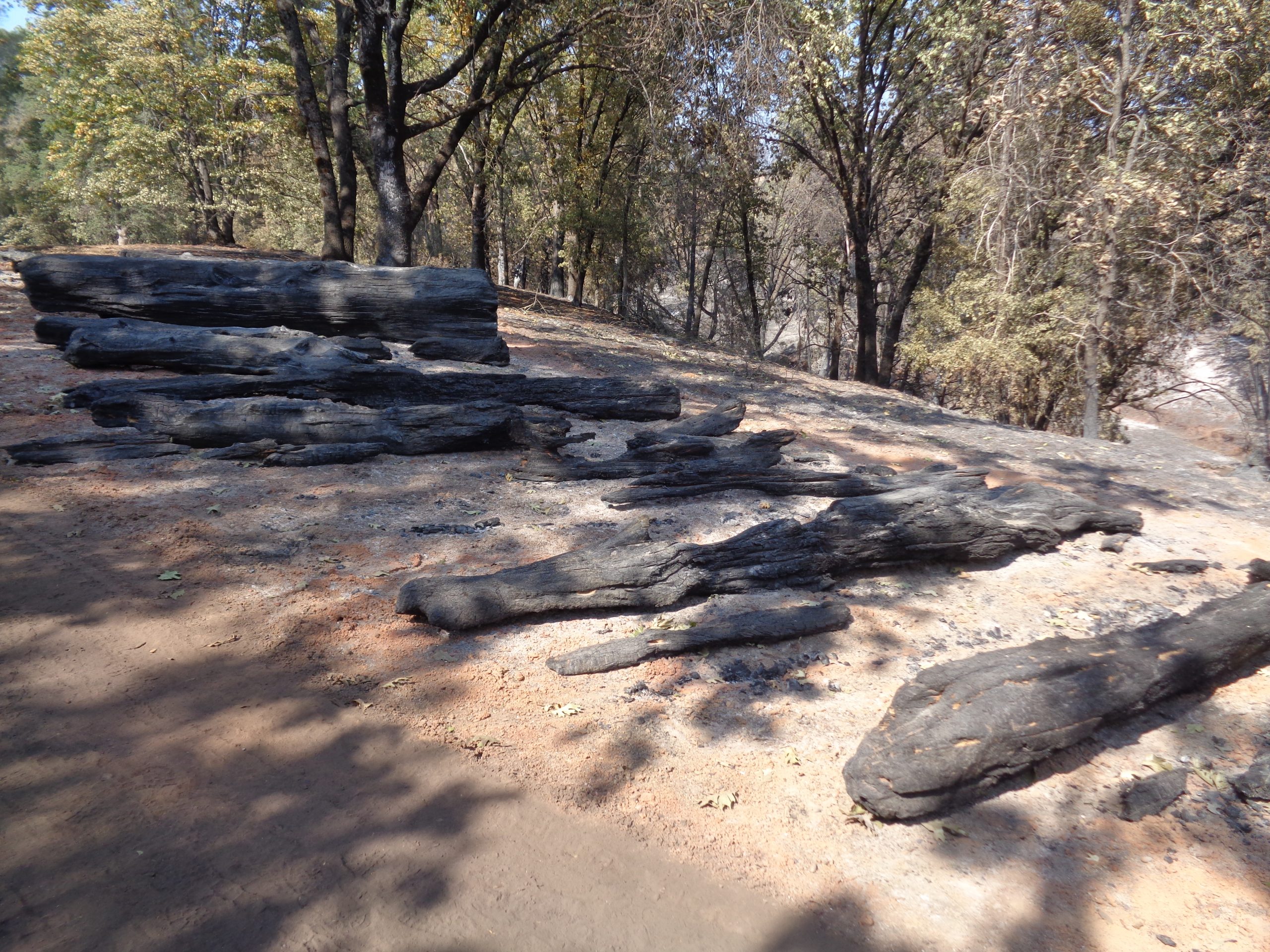 A walk down the meadow to the rock shrine showed the power of the fire as well as the variability of its path. The log deck from over 40 felled trees destroyed by beetles in the past is now charcoal. 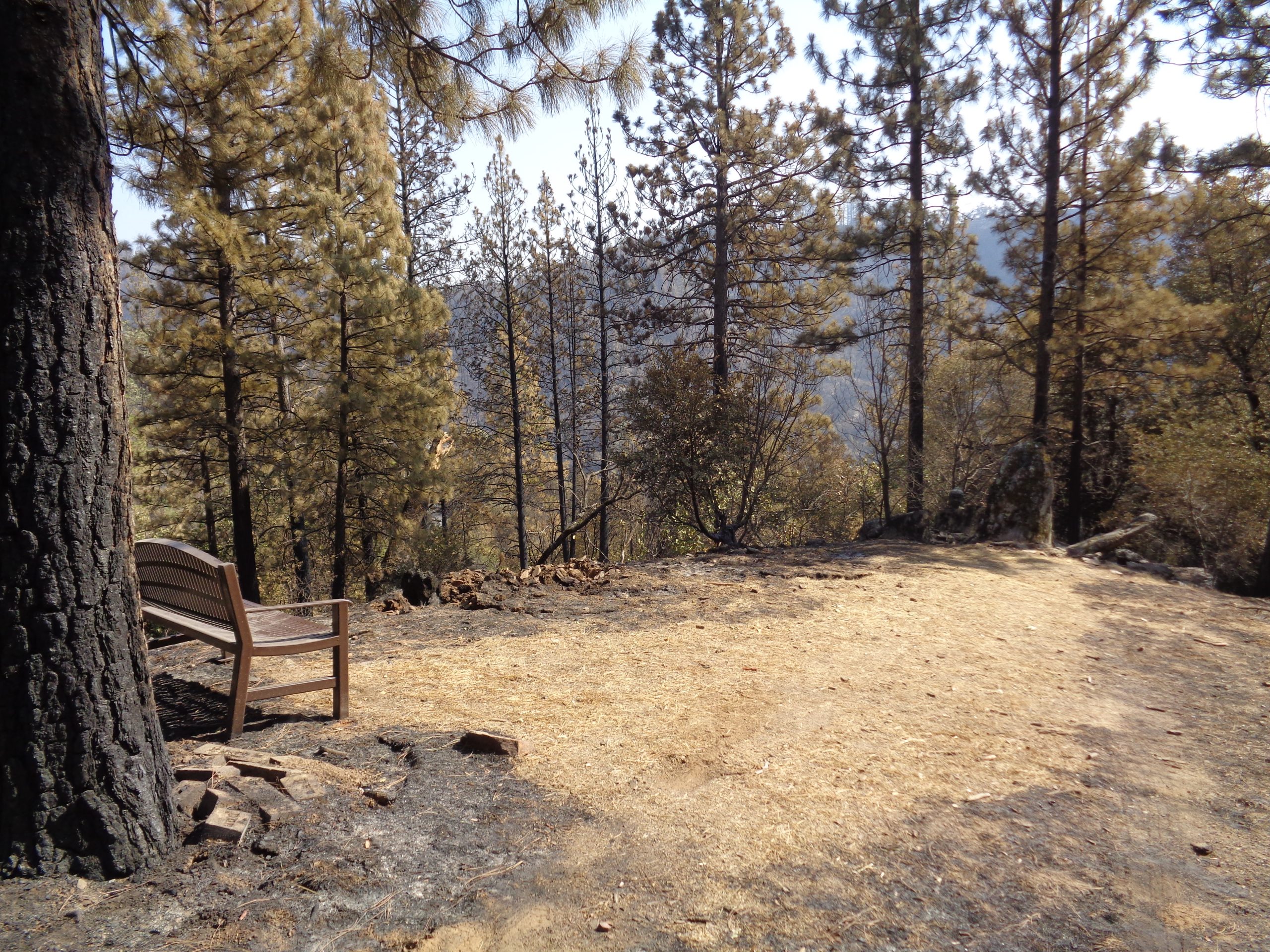 However, at the end of the meadow an unscorched area extends from the meditation bench to the rock shrine. 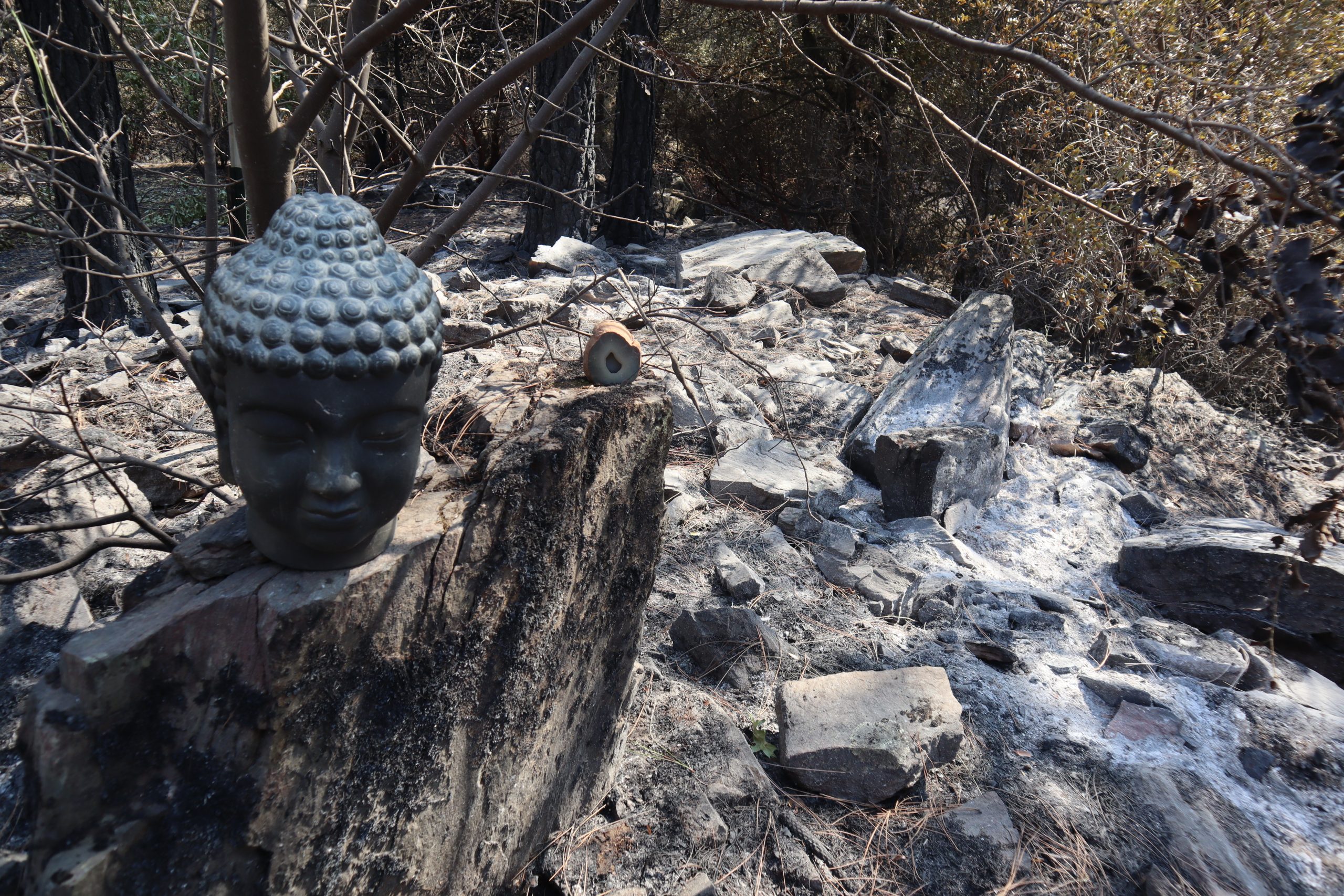 The rock shrine has bushes burnt away leaving a better view of parts of the shrine. 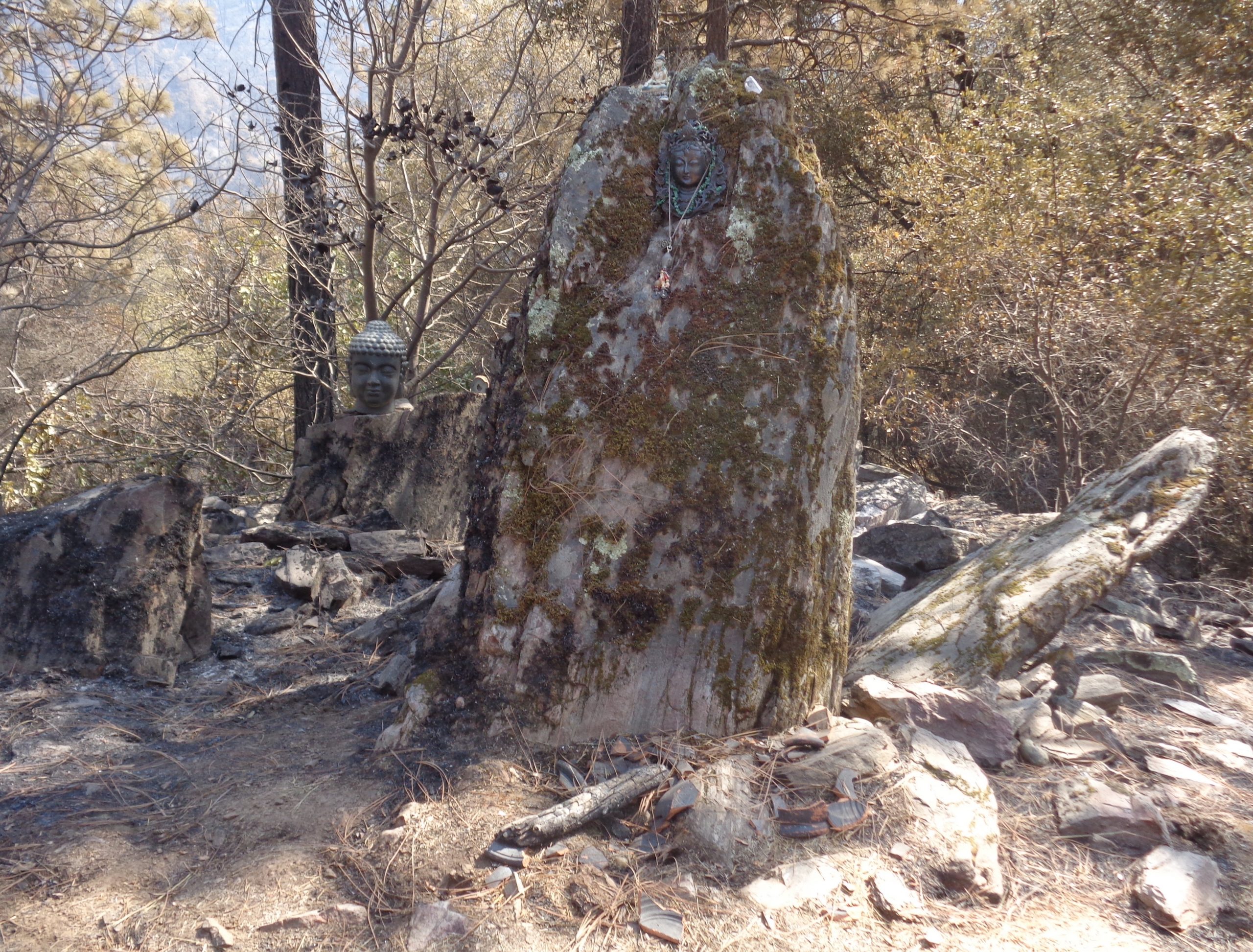 The statues and objects of veneration remain intact.

An hour or two later, when we sat in the shrine room for evening meditation, a doe and her two fawns came to nibble the grass as they do many nights. They are safe.  From sitting in the shrine room one sees mostly unburnt trees and grass.  The big oaks, mimosa, and even the super tall gray pine seem safe.

We hope to meet other animals and see more of the beauty of the forest, both touched and untouched by recent fire, in the coming days as we take time to work on cleanup at the monastery throughout the afternoons.  For the next handful of days we will continue to return to the evacuation temporary vihara in Sacramento for restorative sleep, morning practice, and meal danas.

Looking at the landscape, the melted Buddha rupa, and the deer finding unburnt grass near the vihara itself there is peace. Resting in the truth of the way things are, the fleetingness of everything in physical form is held as simply the natural way of things.

There is work to be done to clean up, to get drinkable water, and to reschedule those intending to visit for a week or more, who were asked not to come during our evacuation. However, Aloka Vihara was able to maintain practice, monastic discipline, and much of the framework of the daily/weekly schedule throughout the evacuation, so all the work we will be doing, will be from and within the continuation of that practice, discipline and framework.

It feels nourishing, rich, and meaningful to have the Dhamma. There is great gratitude to the Buddha’s teachings and to the community of supporters who make it possible for us to live as monastics.