The Aloka Vihara monastics are a community of bhikkhunis, samaneris and anagarikas dedicated to practicing the Buddha’s teaching in the style of the Theravada Forest Tradition. Their practice emphasizes simplicity, renunciation, service and an orientation towards learning from the natural world – all held within the context of the Buddha’s teaching. The nuns are embracing and integrating the realities and challenges of contemporary society into their practice.

Co-founder
Ayya Anandabodhi was born and raised at the foot of the sacred Preseli Mountains in Wales, UK. She first encountered the Buddha’s teaching in her early teens while reading a book on Buddhism. Reading the Four Noble Truths was life-changing and from that moment she experienced a deep confidence in the Buddha’s insight, and a wish to understand his teachings more deeply. At the age of 24, Ayya Anandabodhi began monastic training at Amaravati Buddhist Monastery in England.

Seventeen years later, in 2009, she moved to the USA with a wish to create more opportunities for women monastics. In 2011 she took full Bhikkhuni Ordination, joining the worldwide revival of the Theravada Bhikkhuni Order. Ayya Anandabodhi’s practice and teaching are guided by early Buddhist scriptures, living in community, and through nature’s pure and immediate Dhamma. 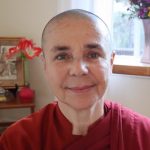 Co-founder
Ayya Santacitta was born in Austria and did her graduate studies in Cultural Anthropology, focusing on dance, theatre and ritual. She also worked in avant-garde dance theatre as a performer and costume designer. In 1988 she met Ajahn Buddhadasa in southern Thailand, who sparked her interest in Buddhist monastic life. She trained as a nun in England and Asia from 1993 until 2009, primarily in the lineage of Ajahn Chah. Since 2002, she has also received teachings in the lineage of Dilgo Khyentse Rinpoche.

Ayya Santacitta co-founded Aloka Vihara in 2009 and received Bhikkhuni Ordination in 2011. She is committed to Gaia as a living being and is currently developing Aloka Earth Room, located in San Rafael, CA.

Before becoming a monastic, Ayya Niyyanika balanced life in Minnesota between work as an ontology consultant for building management and emergency response systems, and practicing with the Common Ground Meditation community.

They received their initial training with the Dhammadharini community from 2014 through 2019. Niyyanika Bhikkhuni gratefully practices monastic life within community. By learning from the Buddha’s teachings and monastic discipline, they cultivate wholesome and supportive factors for their own development on the path and the development of others. Embodiment based in compassion, wisdom, and equanimity is central to Ayya Niyyanika’s path development, as is understanding and living a life of wise and kind interdependence. 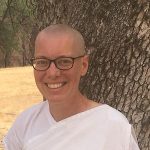 Bethany was born and raised on the prairie of North Dakota and later settled in the Pacific Northwest, tucked in between the mountains and the sea. There, she established a forest homestead while maintaining an actuarial career.

She first glimpsed another way of being in the world while hiking the Pacific Crest Trail. After chasing those glimpses down other trails and tactics, she found the Buddha’s teachings that illuminated them and so much more. The rhythm of walking and immersion in nature continue to be vital to her practice.